Eaten right off the coals, yaki-imo (roasted sweet potatoes) are a beloved centuries-old food, whether they're served by old-fashioned street vendors or modern "imo" girls and boys.

"Yaki-imo…" The forlorn cry of the roasted sweet potato vendor echoed through the canyons of concrete and tiled buildings in a Tokyo suburb. The pre-recorded song, bookended with spoken claims of "oishii, oishii" (delicious, delicious), flowed from speakers on a stubby flatbed kei truck. This small vehicle, a ubiquitous part of working-class Japan, had been converted into a vessel for idōhanbai (literally, mobile sales).

Complete with an oven and an awning, plus a price list and colourful advertising, the truck trundled slowly around the perimeter of a park on a chilly March evening. It paused outside an apartment block, engine idling. A mother and child stopped, and, after a brief exchange with the vendor, they sauntered off with warm sweet potatoes in hand. The truck lingered a moment longer and then slowly drove on. The song, its rising and falling intonation like a lament, started up again: yaki-imo…

In a country better known for its sushi, sashimi and noodle dishes, the simple roasted sweet potato – or yaki-imo – doesn't garner as much attention. But this hearty vegetable, yet another import in a sizeable list of historical introductions to the island nation (ramen, for example), has long been a beloved winter snack eaten in the cold months after its harvest. A favourite in Japan since the 1600s, yaki-imo's moist, chewy texture and burnt-caramel scent still inspire nostalgia – as do the trucks that are gradually disappearing as sweet potato sales move to convenience stores and supermarkets. 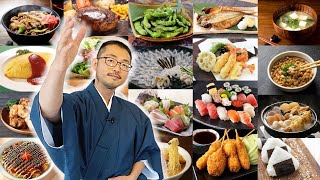 What is Japanese food? WASHOKU explained and its evolution
Taiji ́s Kitchen - Jun 06
In this video, I am explaining about Japanese food, how it has evolved i.e. its categories and why it is healthy. 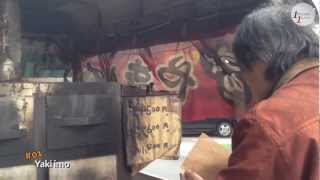 The endurance of Japan's simple street snack
BBC - May 19
Eaten right off the coals, yaki-imo (roasted sweet potatoes) are a beloved centuries-old food, whether they're served by old-fashioned street vendors or modern "imo" girls and boys.